Going into the story, a Twitter user asked when the Nothing Phone (1) would receive the Android 13 update. To that, the top executive said, “A product is more than just its specs, features, and version numbers.” 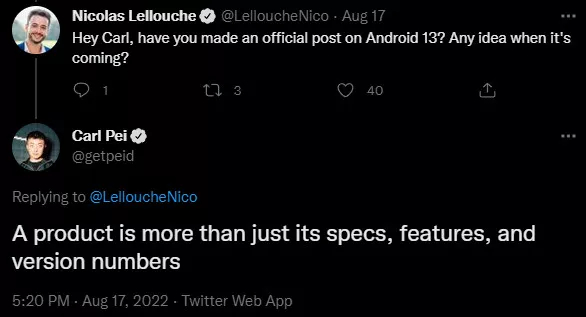 The Nothing Phone (1) Android 13 update timeline is not revealed yet. The top executive’s
response doesn’t really make any sense but what it could mean is that the brand doesn’t have an update to share about the Android 13 at the moment or it is still a work in progress. Either way, a proper response to the question would have been a little assuring for its customers who have spent their hard-earned money.

Moving to optics, the Nothing Phone (1) has a dual rear camera setup on the back, with a 50MP Sony IMX766 primary sensor with ƒ/1.88 aperture, OIS, and EIS image stabilisation and a 50MP Samsung JN1 sensor ƒ/2.2 ultra-wide lens. There is a 16MP Sony IMX471 sensor on the front for selfies and video calls.

The Nothing Phone (1) packs a 4,500mAh battery with 33W fast charging, 15W Qi wireless charging and 5W reverse wireless charging. The phone is equipped with an in-display fingerprint sensor for security, dual stereo speakers and an IP53 rating. Connectivity options include 5G, Wi-Fi 6, Bluetooth 5.2, NFC, and a USB Type-C port.